Germany Bovenden
Placed on more than 1 month
Seller stock ID 902319
PDF Share Facebook WhatsApp Viber Telegram
Engine
Brand BS1 MKII 291
Power 131 HP (96 kW)
Fuel petrol
Volume 1971 cm³
Number of cylinders 6
Gearboxes
Type manual
Number of gears 4
Condition
Condition used
Description
Colour red
More details: German
Standort: im Zulauf / in transit in (PLZ )
interior color: black
interior type: other
number of doors: 2
Marke: Andere
1955 Arnolt-Bristol Bolide
Coachwork by Bertone
Chassis no. X404-3005
Engine no. BS1 MKII 291
1,971cc OHV Bristol 6-Cylinder Engine
Triple Weber Carburetors
130bhp at 4,200rpm
4-Speed Manual Transmission
4-Wheel Hydraulic Drum Brakes
One of 130 Arnolt-Bristol made
Passionately owned for more than 30 years
One of Franco Scaglione design masterpiece
Eligible for some of the most prominent Tours and Concours events worldwide
THE ARNOLT-BRISTOL
Having made his fortune during WW2
Chicago-based industrialist Stanley Harold 'Wacky' Arnolt II was able to indulge his lifelong love of automobiles
and by 1952 was a regional BMC distributor and US distributor for Bristol cars. In 1952
a visit to Carrozzeria Bertone led Arnolt to buy a stake in the Italian company and arrange manufacture of Bertone-bodied Arnolt MGs
Arnolt's next venture made use of the Bristol connection
the UK manufacturer's 404 chassis getting the Bertone treatment in 1953 courtesy of newly arrived stylist
Franco Scaglione. Despite being based on a pre-war BMW design
the Bristol possessed one of the finest chassis of its day
and its 2.0-litre six-cylinder engine was one of the most efficient around. The 1,971cc Bristol six was based on that pre-war BMW 328
which featured an ingenious cylinder head
designed by Rudolf Schleicher
incorporating hemispherical combustion chambers and inclined valves without recourse to overhead
or twin
camshafts. Externally
Bristol's clone of the BMW motor differed little from the German original
most significant changes being essentially metallurgical
using the highest quality materials contributing to greatly increased engine life
Three open models were offered ranging from the basic competition version via the better-appointed Bolide to the fully equipped Bolide Deluxe. There was also an enclosed coupé. Arnolt charged $3,995 for the competition model
$4,245 for the Bolide
$4,995 for the Bolide Deluxe
and $5,995 for the coupé
The Bristol engine could be tuned to produce more than 150bhp
and before long the pretty Arnolts were making their mark in production sports car races in the USA. After class wins at Sebring and Le Mans in 1955
the works team was disbanded following the fatal accident that claimed the life of driver Bob Goldich. Arnolt-Bristol production ceased in 1963 after a total of 130 cars had been sold. Twelve cars were destroyed in a Chicago warehouse fire
and it is believed that just 90 survive
THE MOTORCAR OFFERED
This Arnolt-Bristol Bolide serial number 3005 was the 6th example built
5th production one if putting aside the serial number 3000 that represents the prototype of the model. Little is known from the history of the car between 1955 and the early-1980s
logical guess would be that the car was raced like most of the Bolide at the time
Racing is exactly what the car did in the 1980s after being purchased by a gentleman called Chuck Weber in 1981. Thanks to Mr. Bill Watkins blog-writing about his personal experiences with various Arnolt-Bristol cars
it seems like 3005 was spotted in 1982 at the Monterey Historic Automobile Race with Chuck Weber at the wheel
Mr. Weber then sold the car in 1986 to Fantasy Junction in Emeryville
CA
where it quickly found its new buyer
Mr. Marvin Johnson. During its ownership
Mr. Johnson regularly raced the car in SVRA and had the car entirely restored. The restoration that was led by Bristol specialist Steve Krinsky from St Paul
MN
especially included a full engine rebuilt as well as a chassis and body acid-dipping. Mr. Krinsky was then appointed to find a new owner to the car
which officially happened in March 1992 when the current seller acquired the car
The previous owner purchased the car in 1992 and took care of it over the past 30 years in the dry and shiny Copper State. During his ownership
the car has remained unchanged from its restored condition. No racing-miles have been put
only road miles
about 4,000 exactly. The car notably took part to the 1992 edition of the Copperstate
From a visual standpoint
some differences are to be noted compared to the original look of the car. First
just like the trim plate shows it
the car originally came in a light green
but was repainted in red during the restoration. Same for the upholstery that was remade from brown to black
while keeping the original Italian seats
specifically known for their great comfort. Additionally
the car was fitted with additional front lights instead of the usual smaller lights located around the grill
From a
ZUBEHÖRANGABEN OHNE GEWÄHR
Änderungen
Zwischenverkauf und Irrtümer vorbehalten!
powered by two S
classic vehicle
sport seats
roadworthy
Purchase tips
Important
This offer is for guidance only. Please request more precise information from the seller.
Safety tips
Seller's contacts

Gassmann GmbH
In stock: 2559 ads
Seller with Autoline for 8 years
The phone numbers have been checked 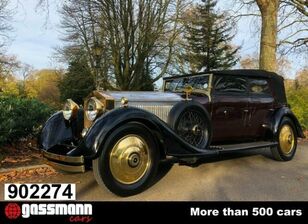